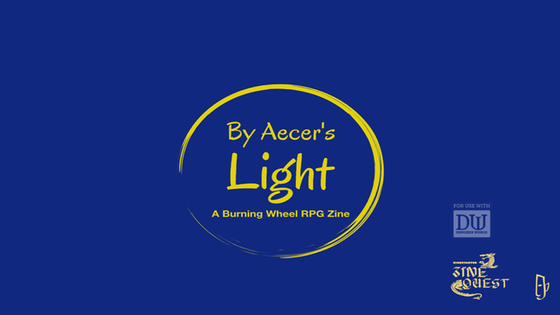 A zine for the Burning Wheel(and Dungeon World?) RPG featuring Roden, and Wolfen and bad Men, oh my!

Latest Updates from Our Project:

You did it, with 39 hours to spare! Johnstone Metzger goes to work on the Dungeon World Stretch Goal!

Special thanks to the Gauntlet folks for pushing us over the top for this. I'm ready to start the weekend now!

One of the main protagonists of the Roden is the Rakshasi. The human folk of south river call her, Velmarh, the jaguar goddess she walks. The humans revere her and owe her their prosperity, their lives. She has kept the Wolfen from hunting this far south, and for this the Wolfen fear the Rakshasi.

If memory serves, AD&D was where I first  learned of the Rakshasa, second only to the Illithid on my list of favorites. The reverse paws, the shape changing powers —shoot, they had me at reverse paws! The Burning Wheel version of the Rakshasa, called a Raksha is a trouble maker. In fact, it gets a mechanical award ( a persona point) for any conflict it starts!  Velmarh is also an outsider, summoned by the humans during the Elven wars. She hates it here and longs to return home and she needs the Roden to make that happen for her.

So three days out we have a Burning Wheel zine with a campaign map, expanded content on the Roden by Peter, the creator of the Burning Wheel Roden. We’ll cover sorcery and art magic used by Roden. Playable Wolfen life paths.

But we’re less than $250 away from Dungeon World content written by Johnstone Metzger… so close! The Dungeon World stretch goal also delivers Roden and Wolfen as playable DW characters, but also fronts for the last Elf and the Rakshasi. Spread the word! Please don’t let my mom slap down the difference, you know how moms want their babies to win!

GenCon, Origins and the Big Bad Con rewards have sold out! Tables are FULL!

BIG Rat Ogre hug to the RooSack Gamers, you folks are Ratacular, see y'all at GenCon. I'll have a little extra cheese for the backers of all the table games!  Dang, I should have gotten tour tee shirts!!🤣

Over the years I've run Burning Wheel at conventions with new folks, I leaned heavily on the first 75 pages of the book. (Vs tests. Linked tests.) My best new player story happened at PAX Unplugged last year. A family, mom , dad and a son, came to play Burning Wheel with me. Their first RPG ...ever. They played Roden and it was perfect! They were naturals and I enjoyed watching them engage each other, the game and being Roden. Just using the first 75 pages. I saw them later in the day at the BW booth! Mom thought they needed a couple copies so dad could run the game at home!

It was only when there were experienced players at the table that we'd take on a subsystem like Duel of Wits or Range and Cover.  I'm stepping up my game. I want to get new to BW players to be comfortable with the basic tests and  to experience one of these sub- systems in these new adventures.

I'm looking forward to running the three different reward adventures. In The Bandit (of GenCon) we discover abandoned Roden nests and other Roden in the world. These vermin couldn't be more different, can they be friends or are they foes. The Origins of the Last Elf features the Elf in the tower above the Roden nest. He's been helpful over the seasons, though not all the Roden are aware of him. A dark secret is discovered that puts the nest in peril!  The Big Bad Wolf has the Roden dealing with an exiled Wolfen, that's devouring Roden. What will you do?

That's all for now, I've got this cheesy grin on my face thanks to you, Kickstarters!

Brie and I talk about By Aecer's Light for Thoughty's Quick Shot.

I hear tell, these things get awfully quiet in the middle and more buzz again toward the end.

There is a ton of analytics on the Kickstarter dashboard side. One can see the obvious metrics of backers across tiers, distribution of backers and referrals, etc. The one metric that drives me nuts is the one called followers.

Followers are folks who have not yet backed your project, but expressed interest. There’s a bit over 100 in number for this Kickstarter! So the naturally I wonder are they waiting on me to do something? What do I do next? LOL!

Maybe nothing, there is such a thing as too much data!

I grew up in Jersey City, NJ at least until high school. It wasn’t until 6th grade when I was exposed to D&D. I played a thief. On a tomb raid I got killed when Tenser’s floating disc expired dropping a buttload of treasure on my thief..I was hooked!

I sold Captain 'O' greeting cards to earn the Red Box set, and by my birthday I had gotten the AD&D DMG and taken over the DM duties of our group. That group was half young women and very multicultural. My gaming groups would go on to be pretty close to 50/50 male:females up until I joined the military.

Traveller, Marvel Superheroes (FASERIP) and Rolemaster were the next games I would play.

Champions and Shadowrun(1ED) were the big games I played a ton of in the military. There were short runs of other stuff, but these two were the mainstays. I also got into miniature wargaming at that time too.

When I finally mustered out, it was miniature wargaming that became my focus. I refereed games for Rackham at Origins and GenCon in their early days. I earned a hoard of beautiful Rackham miniatures.

3rd Edition D&D and the Conan D20 were the founding games of my corporate job D&D group. It was then I began looking for something more than what D&D was providing. Sorcerer RPG grabbed my attention, my group talked big, but didn’t bite. But then Burning Wheel 1ED got them excited, we got it to the table. And it broke them. We fought, argued and disbanded. I wanted to try something new, they did not —but wouldn’t say so and turtled up at our first BW session.

I assembled/found two new folks, we had some great Burning Wheel adventures back then. One of them I still game and am close to today, the other is always welcomed back to our table, life had different plans for him for a bit.

So there was always gaming in my life and I’m grateful.

But I still hate okra, never gonna eat it.

So, that’s me Kickstarter. I leave you with some Kurt Komoda magic!